Vivian (Ogden) Jenkins was born in Masvingo (Fort Victoria), Zimbabwe. She was raised in Gweru (Gwelo) where she attended Riverside, CJR and Chaplin schools. She qualified as a primary school teacher at Hillside Teachers' College, Bulawayo.

Vivian married Peter Jenkins at Victoria Falls in 1976, and they settled in Bindura where Peter was superintendent of the smelter at Trojan Nickel Mine. Their first two sons were born there before they spent two years at CFNI in Dallas, Texas, USA, Their daughter was born in Dallas.

Their third son was born in 1985. Education, marriage, four wonderful children - a career on the go. The first 35 years were packed full -  and fulfilling.

Vivian taught at MCS and MCC and then became pioneer principal of Midlands Christian Training Centre in 1992. A UNISA Distance Learning Centre, MCTC trained teachers for MCS and MCC and took in many others sponsored by other ATS schools. Peter became involved in missions and spent a lot of time  working with church leaders throughout Zimbabwe and Zambia and later, the Democratic Republic of Congo.

In 1985, Vivian began writing the #SunriseReaders with Chrissie Lewis - published by Longman Zimbabwe. Over the next few years, they completed twenty early childhood readers for Grades One and Two. These are used in schools all over Zimbabwe to date.

In 2007, Vivian and Peter moved to London to work in an inner city church for four years.

In 2011, they returned to Africa where they now reside in the beautiful Mother City - Cape Town.

Their strong connection with Zimbabwe, Zambia and DRC continues, with new recent heart-connections with Mozambique.

My parents went into full-time ministry when I was about seven years old. I grew up in an ‘old fashioned’ pentecostal church and saw people living out their faith fully, half-heartedly or just ‘nominally’. Of course. Because that’s the way people live out their faith, isn’t it? I was fortunate to have parents who believed that God is Who He says He is, and He can do what He says He can do. They left home, family and security to give of themselves unstintingly. There wasn’t any hypocrisy – they were real. However! We were extremely wealthy spiritually, but it was materially and emotionally tough. I resolved I would never marry a minister when I grew up. And I didn’t. I married a Chemical Engineer who had graduated with his B. Chem Eng with honours. He had a secure job with De Beers (Diamond Research Laboratories) and a bright future.… 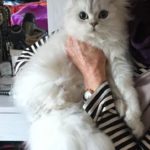 Princess Bella-Joy gave birth to her third litter of four beautiful, healthy #PersianChinchillakittens on 1st January 2020. The first baby arrived at precisely 20:20! How cool is that! They are already 17 days old!

Women in the Word – Ladies Bible Study in Fish Hoek

We are a group of women of all ages from different churches – or no church at all – in Cape Town’s Far South. We share a common interest in our desire to learn more about God. We usually meet for 8 – 12 weeks of Bible Study twice a year. If you’re near Fish Hoek and would like to learn more about our Bible study, please reach out through our Facebook page.

Dear Friends and Family We would like to wish you a very happy Christmas, and may 2020 be a wonderful year for you. With love and blessings from Peter and Vivian 2019 started with us looking out from Boyes Drive at the fireworks over the Cape Flats, having just fetched Jonathan, Jessie and Jessie’s sister Laurie from the airport. They had spent Christmas with the Carlson family in the States. Jessie’s Father, Eric, and brother Ethan joined them a couple of months later for a first ever African holiday. Amongst other things, they went paragliding, joined by Viv, who loved it! For Vivian, rewriting the Sunrise Readers continues to be a major focus. Pearson Africa held an in-house marketing seminar, and Viv and Chrissie Lewis were asked to make a presentation on the new edition of the books. This was followed by ongoing editing and re-writing, starting briefly in our…