As soon as she learned to read, Vivian became an avid reader. As soon as she could write, she started writing her own stories. Then out came her mother's manual type writer. Vivian would sit for hours, pecking away at the keys. Friends  sometimes sat waiting patiently for page after page, "hot off the press". She dreamed of one day becoming a published author.

When she grew up and became a teacher, Vivian's dreams came true. Perhaps not in the way she had thought.  Children's novels? Only one in print. Hangman's Treasure. Instead, she joined with Chrissie Lewis in 1985 to write the #SunriseReaders - a reading scheme of twenty reading books for the first two - three years at school - published by #LongmanZimbabwe. She went on to write six more readers - the #SunriseReaders Blue and Red books for the next two years at school. Then she was asked to write the Grade 7 textbook for Religious Education in Zimbabwe - the #FaithinAction Grade 7 Pupil's Book. More recently, in 2015, Vivian was approached by PEARSON Africa to write six #StepUp English Readers for Grades 1 - 6 in Zimbabwe, and then followed the decision by PEARSON Africa to revise the well known #SunriseReaders. This is a task Vivian and Chrissie are thoroughly enjoying. #SunriseReaders Books 1-5 are in the market, whilst Books 6 - 10 have been revised and are in production at this time.

The revised, updated Sunrise Readers are available from PEARSON or LONGMAN offices in Zambia, Botswana, Namibia and Mozambique.

View the selection of Children's Books by Vivian Jenkins 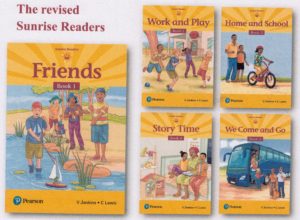